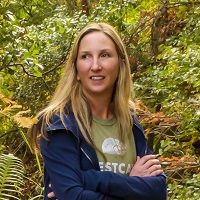 Amber and her family moved to Westcave in 1974 where she and her brother were raised. Her father, John Ahrns, was the first Preserve Manager. With an intrinsic love of the outdoors and educating people about it, she moved on to help manage Hamilton Pool Preserve for the better part of a decade. She received her BS from Texas State in Geography and Planning. In 2000, Amber started her professional career as a Field Biologist with Travis County managing both the Balcones Canyonland Preserve and Park system for all land management practices. In 2009, Amber became a full-time Mother after the birth of her and her husband’s first child. In 2011, she started back at Westcave part-time helping with educational programs and land management issues. After her second child was born in 2012 Amber became the Conservation Director of Westcave starting in 2013.