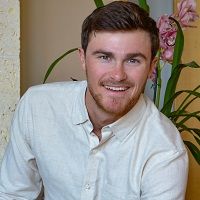 Josh Winkler grew up in Austin, Texas splitting his time exploring the rivers and creeks of Austin, and hiking and fly fishing at his family ranch in Blanco County. That time outside, combined with annual backpacking trips in the mountains of the American West, instilled in him a desire to work towards getting more people into the outdoors. After studying Environmental Science and Philosophy at Colorado College, Josh began that work as a Trip Leader at Explore Austin, taking groups of under-served youth mountain biking, climbing, mountaineering, and backpacking in the Rockies.

After two years working with non-profits on the consulting team at Mission Capital, Josh now splits his time as Creative Lead at Explore Ranches, Lead Guide at Off & Out, and as an Associate Producer and Camera Operator for wildlife conservation documentaries. Josh enjoys fly fishing, paddling, mountain biking, and spending time outside with his girlfriend and pup Teo.